NOTE: This is the first of four parts of a discussion, originally written in 2007,  of some the science the shows up in Against the Day.

Part 1: The Michelson-Morley Experiment and the Failure of Classical Physics

Thomas Pynchon is known for his dense and often obscure references to history, pop-culture, and especially science in his novels. His novel Against the Day is set around the beginning of the 20th Century, a time when our understanding of space, time, and light, rooted in classical physics, was completely overturned and replaced by a revolutionary new perspective based on the theories of special and general relativity. Pynchon takes the science of this period and incorporates it deeply into the language and structure of Against the Day, more so perhaps than in any of his other novels. Against the Day is suffused with meditations on light, space, and time, and often plays with the tension between different perspectives in math and physics – classical physics versus relativity, or Maxwell’s laws of electromagnetism described with the imaginary numbers of quaternions versus the real numbers of vector analysis. This material is not just filler – it’s critical to the core of Against the Day, a fact which has been underappreciated in early reviews of the novel. One reviewer claimed that a new generation of writers has a “grasp of the systems that fascinate Pynchon — science, capitalism, religion, politics, technology — [that] is surer, more nuanced, more adult and inevitably yields more insight into how those systems work than Pynchon offers here.” When it comes to science at least, this claim is absolutely not true – Pynchon’s achievement in Against the Day proves that he is peerless at deeply and knowledgeably working the most abstract scientific subjects into the context of our common humanity that is the ultimate concern of his novels.

My goal here is twofold: First, to illustrate how Pynchon goes beyond using science as simply a backdrop, or a way to show off his amazing erudition – he weaves scientific concepts into the language and structure of his book better than any other author working today. Second, I’ll lay out a primer on the basic scientific ideas so that readers of Against the Day can make their own discoveries about the novel. I cover four main topics: (1) the Michelson-Morley experiment and the breakdown of classical physics, (2) space-time and special relativity, (3) the development of vector analysis and the eclipse of quaternions (I’ll give you my guess of the ‘Baedeker’ that Pynchon ‘looted’ for his material on quaternions and vectors), and finally, Riemann surfaces.

These four topics cover most of the scientific references in Against the Day. Pynchon, clearly being a sucker for historical trivia, is mindful of the chronological development of these subjects, so I’ll cover most of them from a historical perspective, including some famous, now-rejected explanations proposed for the negative result of the Michelson-Morley experiment. It is also important to note the science Pynchon did not include in the novel – other important advances were being made at the time by some of the same scientists featured in the book, but Pynchon hardly mentions them – most notably those in statistical mechanics (and yes, entropy) made by J.W. Gibbs. In this book, Pynchon has chosen to focus on space, time, and light.

END_OF_DOCUMENT_TOKEN_TO_BE_REPLACED 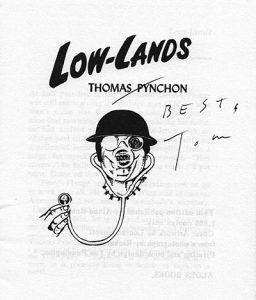 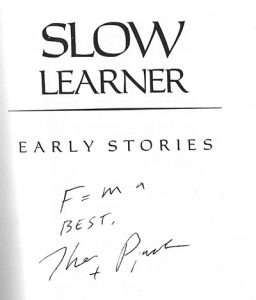