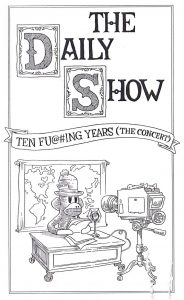 In 2006, Thomas Pynchon wrote the foreword to the program for The Daily Show’s Ten-Year Anniversary Concert, held November 16, 2006 at Irving Plaza in New York City.

When Scott Jacobson, a comedy writer who put together the concert, was asked about working Pynchon, he replied:

I knew it would be difficult to get the writers to submit pieces for the program – they’re a busy bunch of folks – so I thought I’d improve my odds by getting a foreword from someone so unlikely that it’d capture the staff’s interest. I dug up the email of Thomas Pynchon’s wife, who’s a literary agent, and pitched her the idea. To my surprise and delight, it all worked out. Pynchon actually faxed in that piece. He came into the office one day, too, and stayed for a taping. I had a brief conversation with him about Paul Verhoeven’s Starship Troopers.

And now… Here it is in all its glory!

The Evolution of the Daily Show — by Thomas Pynchon*

Actually, it all began with Death to Smoochy. The green light had been given to proceed with Death to Smoochy 2 on the strength of the first weekend grosses, as well as some unexpected merchandising feedback. It seemed that “Smoochy the Rhino” items weren’t selling nearly as well as those based on the evil network executive “Marion Frank Stokes,” played by Jon Stewart. This applied across the spectrum — mouse pads, lunchboxes, T-shirts, McDonald’s tie-ins (the Happy Meal being briefly eclipsed by the Anxious Meal, served in a takeout bag bearing Mr. Stewart’s likeness) — you name it. Kids started showing up at school in business suits and wearing the same peculiar fringe haircut as the Stokes character, provoking peer commentary and vice-principalistic perplexity.

In the course of reviewing star availability for DTS2, however, one of the producers suddenly recalled that toward the end of the first picture it was strongly implied that “Frank Stokes” had been done away with in a violent manner, rendering perhaps problematic his appearance in Part Two. Options such as resurrection, identical twins, and the extensive use of flashbacks were entertained and discarded. Meanwhile the Frank Stokes Armani Edition action figure was outselling G.I Joe, Darth Vader, and eventually even Barbie herself. Focus groups began to hint at the possibility of a class action suit if “M.F.S.”, as he had come to be known, did not appear in Death to Smoochy 2.

Well. Talk about dilemmas! Script development sessions became notable for long and gloomy silences, until one day, down at the far end of some all-but-forgotten conference table, a screenwriter, just back from a weekend seminar in Canoga Park entitled “Disrespect — Make It Work For You,” tentatively raised his hand.

“Yes, I forget your name, you had your hand up?”

“Let’s say that in life, in his career as a network slimebag, Frank Stokes accumulated a huge pile of truly horrible karma. So next time around, to work off this karmic debt, he gets to expose, mock, ridicule and otherwise invite contempt for the very behavior he was once guilty of in his former life. Lying, corruption, the abuse of power, so forth.”

“Hmm. If we could pitch that in shorter sentences…”

So it came about that, though the studio still owned the character of Frank Stokes, the premise of Jon Stewart as a reincarnated evildoer persisted somehow as a negotiable script element, passing from one corporate entity to another, undergoing mutation at each step, till it finally ended up at Comedy Central, Where it was welcomed with a scream of recognition.

And one thing led to another…

NOTE: You can download a PDF of the entire program here.