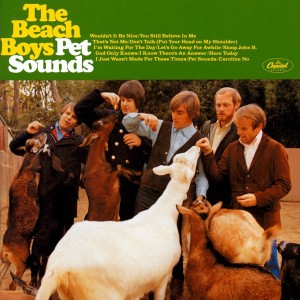 In the mid-1960s, both Thomas Pynchon and the Beach Boys’ Brian Wilson were forging new creative paths in their respective art forms. Both artists, fueled by visions partially — or significantly — enhanced by the ingesting of psychedelics, were attempting to capture these visions in their work. Pynchon, in his groundbreaking third novel Gravity’s Rainbow, and Wilson, trying to further extend his idea of “a teenage symphony to God” with the highly anticipated follow-up to the Beach Boys’ Pet Sounds LP (1966), were trying to bring it all together.

Pynchon was able to wrangle his deep and complex vision into an incredible novel, winning the National Book Award in 1974 and almost garnering a Pulitzer Prize (rather than select such a controversial novel, the jurors gave out no prize for literature in 1974). Wilson, however, facing pushback from his band (made up of three brothers and a cousin) and his record company, as well as a psyche increasingly destabilized by his drug intake, was unable to bring his Smile project to fruition.

Yes, these two artistic giants did meet, due to Pynchon’s enthusiasm for Pet Sounds and a Cornell classmate, writer Jules Siegel (RIP), who also knew Brian Wilson. The meeting, which occurred sometime in 1966, didn’t result in any meaningful exchange of ideas between the two; but a meeting by two such highly creative men at the height of their powers and both involved in massive projects, is noteworthy. Here’s the story….

In his March 1977 Playboy article “Who Is Thomas Pynchon…And Why Did He Take Off With My Wife?” writer Jules Siegel claims that in 1966 while on assignment to do an article on Bob Dylan for The Saturday Evening Post, he visited Pynchon in the one-room apartment he rented in Manhattan Beach, California, to wit:

I told [Pynchon] about the Dylan assignment. ‘You ought to do one on The Beach Boys,’ he said. I pretended to ignore that. A year or so later, I was in Los Angeles again, doing a story for the Post on The Beach Boys [ultimately published by Cheetah magazine]. He had forgotten his earlier remark and was no longer interested in them. I took him to my apartment in Laurel Canyon, got him royally loaded and made him lie down on the floor with a speaker at each ear while I played Pet Sounds, their most interesting and least popular record. It was not then fashionable to take The Beach Boys seriously.

‘Ohhhhh,” he sighed softly with stunned pleasure after the record was done. ‘Now I understand why you are writing a story about them.’

Pynchon and Brian Wilson Meet and Attempt to Hang Out 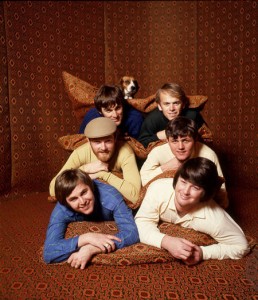 In the same Playboy article, Jules relates the time Pynchon and Brian were introduced, at Brian’s home in the Bel Air neighborhood of Los Angeles:

One night we all went up to Brian Wilson’s Babylonian house in Bel-Air. Brian then had in his study an Arabian tent made of crimson and purple Persian brocade. It was like being inside the pillow of a shah. There was one light, fashioned from a parking meter. You had to put pennies in it to make it stay on. Brian brought in an oil lamp and tried to light it. The parking-meter light kept going out and Brian kept dropping the oil lamp and stumbling over it. Neither he nor Pynchon said anything to each other. Another night, we went to Studio A at Columbia Records, only to find our way barred by one of Brian’s assistants, Michael Vosse, who explained that we couldn’t come in anymore, because Chrissie [Jules’ wife who was with him and Pynchon] was a witch and fucking with Brian’s head so heavy by ESP that he couldn’t work.

In a 2006 biography of Brian Wilson, Catch A Wave: The Rise, Fall and Redemption of the Beach Boys’ Brian Wilson (Peter Ames Carlin, Rodale, 2006), Jules Siegel provides an updated description of the Pynchon/Wilson meet ‘n’ greet:

When Siegel brought his friend Thomas Pynchon up to the house one night, the famous hipster novelist sat in stunned, unhappy silence while the nervous, stoned pop star — who had dragged him into his then-new Arabian tent to get high — kept kicking over the oil lamp he was trying to light. ‘Brian was kind of afraid of Pynchon, because he’d heard he was an Eastern intellectual establishment genius,’ Siegel recalls. ‘And Pynchon wasn’t very articulate. He was gonna sit there and let you talk while he listened. So neither of them really said a word all night long. It was one of the strangest scenes I’d ever seen in my life.’ (p.103-104). 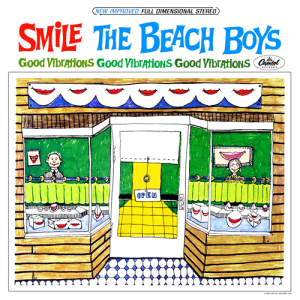 The proposed cover for “Smile” – Illustration by Frank Holmes

Smile, Brian Wilson’s ill-starred attempt at the ultimate pop album, is the most famous album that was never made (Until 2004, when Brian & Van Dyke Parks finally finished the album, released under Brian’s name … it’s quite lovely). Murray Wilson was Brian’s legendarily abusive father; he managed the Beach Boys early in their recording career, but was eventually fired.

In late 1966, fueled by the zeitgeist, psychedelics, hubris and hashish, Brian set out to create his ultimate “teenage symphony to God.” Earlier in 1966 he had almost singlehandedly created the acclaimed Beach Boys’ album Pet Sounds, and had followed up that masterpiece with the gorgeous single, “Good Vibrations.” (Paul McCartney has called Pet Sounds “the classic of this century” and the song “God Only Knows” the greatest pop song ever written.)

Unfortunately, as various personal and professional pressures mounted, Brian became destabilized. Smile had become unweildy in its scope, and the other Beach Boys thought it was too weird and feared they might lose their following (and their income). In May 1967, when Brian heard the Beatles’ Sgt. Pepper’s Lonely Hearts Club Band, he became completely dispirited (there was intense competition intermixed with the mutual admiration between the two groups) and ultimately scrapped the project.

In the last few years quite a number of tracks from the album have been officially released, revealing Smile, even in the rough, to be a splendid and highly imaginative “intertextual” tour of pop music’s diverse landscape. Like Pynchon’s Gravity’s Rainbow, Smile runs the gamut from high art to total silliness, reflecting the shared sensibilities of Wilson and Pynchon. (A character named “Murray Smile” makes a brief appearance in Gravity’s Rainbow, in Slothrop’s dream as “next to you in basic, company 84.”)

In 2004, a healthier and happier Brian Wilson finally completed Smile, releasing the album on Nonesuch Records and, with his amazing young band, touring the world performing the entire work as a 3-movement suite (I saw them at Davies Hall in San Francisco — it was stunning!). Brian continues to write and record music of extraordinary beauty and refinement.

Check out “Goodbye Surfing, Hello God”, an October 1967 article Jules Siegel wrote for Cheetah magazine. The link goes to an excerpt of the article. You can purchase an eBook of the full article from Amazon here.