For both the original hardcover and paperback versions of Gravity’s Rainbow, the differences between the true first editions and the Book Club editions are fairly subtle, but easy to spot.

When the Viking Press published Thomas Pynchon’s Gravity’s Rainbow in 1973, it simultaneously issued 4,000 hardbacks and 16,000 paperbacks. The reason for publishing the less-expensive paperback ($4.95) at the same time as the hardback ($15.00) was due to the concern of Corlies “Cork” Smith, Pynchon’s editor at the time, that Pynchon’s readership — younger, college-educated, hipper — might balk at coughing up $15 for the novel.

From the Bookforum website: “Pynchon from A to V: Gerald Howard on Gravity’s Rainbow

Now the real problem presented itself: How to publish a seven-hundred-plus-page book at a price that would not be grossly prohibitive for Pynchon’s natural college and post-collegiate audience. V. and The Crying of Lot 49 had each sold more than three million copies in their Bantam mass-market editions. […] According to a letter from Cork Smith [Pynchon’s editor] to Bruce Allen (who reviewed Gravity’s Rainbow for Library Journal but wrote to Viking complaining about the novel’s price), Viking would have had to sell thirty thousand copies at the then unheard of price of $10 just to break even. By comparison, V. and The Crying of Lot 49 had sold about ten thousand copies apiece in hardcover. So how to reach even a fraction of the cash-strapped Pynchon-loving millions? Cork himself hit on the then unique strategy of publishing an original trade-paperback edition at $4.95 and “an admittedly highly priced hardcover edition” at $15, each identical in paper stock and format, differing only in their binding. The gamble: “We also thought that Pynchon’s college audience might, just might, be willing to part with a five-dollar bill for this novel; after all, that audience spends that amount over and over and over again for long-playing records.” The other gamble was with the reviewers, who rarely took paperback fiction seriously, but as Cork wrote, “We feel — as, clearly, you do — that Pynchon cannot be ignored.”

As you may know, both editions in their first printings are quite valuable, particularly the hardcover (and even superior copies of subsequent printings of the first edition), but also the first edition/first printing of the paperback edition. However, the differences between true first editions and the subsequent Book of the Month Club (“BoMC”) (hardcover) and Quality Paperback Book Club (“QPBC”) editions of Gravity’s Rainbow, both published in 1973 (Thomas Pynchon: A Bibliography of Primary and Secondary Sources, Clifford Mead, p.13), are a bit subtle, but easy to identify when you know what to look for.

NOTE ABOUT VALUE: First editions of both the hardcover and paperback editions of Gravity’s Rainbow are only of significant value if they’re first printings, although later printings of both are still pricier than later editions. Printings subsequent to the first printings are clearly indicated on the copyright page, after the line “Printed in U.S.A. by the Colonial Press Inc.” If there is no indication of a subsequent printing, then it’s a first printing (assuming, of course, it meets the other criteria in this article).

Both the hardcover and paperback editions went into multiple printings after the first run. BoMC hardcover editions generally go for between $100 – $300, depending on their their condition (VG to Fine). The QPBC paperbacks are not worth that much at all and should only fetch more than, say $10, only if they are misrepresented as first editions.

For the hardcover edition, determining its first-edition status is fairly easy. Although the outsides of the dust jacket, front and back, are the same for both the first edition and the BoMC edition, the inner front flaps of the two editions differ; the first editions have the $15.00 price at the top right and the number “0273” at the lower right, whereas neither is present on the BoMC dust jacket inner flap.

Bookseller Ken Lopez, who’s dealt in Pynchon books and Pynchonalia for decades, describes a key difference between the first-edition dust jacket and the BoMC dust jacket:

The one way you can tell the difference between the two editions at a glance is the dust jacket: the publisher’s edition is a glossy, laminated jacket; the BOMC edition uses a coated (but not laminated) paper, which is a bit less shiny and from which the orange color tends to rub much more readily; so if you see a Gravity’s Rainbow with “rubbing” to the jacket, it is almost certain to be a book-club edition, as laminated paper doesn’t really have the color rub off the same way.

Another little detail: There is a very small (1/4″ square) maple leaf, or sometimes just a square, embossed (aka “blind stamped”) at the bottom right corner of the back boards (i.e., back cover). It’s quite subtle, but it’s there (and quite difficult to capture in a photo!): 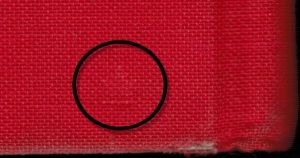 Finally, the BoMC edition of Gravity’s Rainbow has, at the bottom of the gutter between the last two blank pages, a tiny alpha-numeric code: 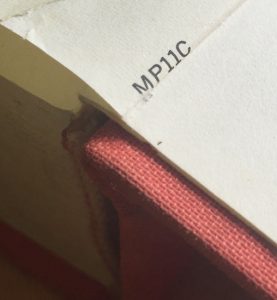 As mentioned above, the first-edition/first-printing paperback editions of Gravity’s Rainbow are quite collectible and difficult to find in “fine” condition. Most of the ones I’ve seen have lots of rubbing on the cover as well as fading, particularly on the spine.

On Ebay, I’ve seen very many of the Quality Paperback Book Club (“QPBC”) paperbacks of Gravity’s Rainbow being sold as first editions. I usually write the seller to advise him that his copy is NOT a first edition and that s/he should change the listing to reflect this. I think the frequency of this misrepresentation is due more to ignorance than deceit. Until this article, there has been no guidance to be found on the Internet.

Whereas on the back cover of the first-edition paperbacks, you’ll see “SBN 670-00374-3” at the bottom right, below the Viking Press address line:

On the back cover of the QPBC edition, instead of the SBN number, you’ll see in the same location a white rectangle below the Viking Press address, with a string of 4 or 5 numbers. I’ve seen different numbers on copies, and I’m not sure to what that number refers.

So there it is! Feel free to ask questions or add info in the Comments section, below.