Tom Schaub has taught at University of California Berkeley and University of Wisconsin Madison. He has been Executive Editor of Contemporary Literature since 1989, and has published widely on Thomas Pynchon, including Thomas Pynchon: The Voice of Ambiguity, and an MLA teaching volume, Approaches to Teaching Pynchon’s The Crying of Lot 49 and Other Works. He now spends as much time as possible in Maine, and tries to recollect what it felt like back then in the post-sixties lull, when the opportunities society had to offer seemed like threats to his well-being.

“This time, as a matter of fact, she has a confirmed Omar Sharif sighting, inside a tent, playing bridge and flashing that killer smile.”
Bleeding Edge, p. 406

My Initiation into The Quest 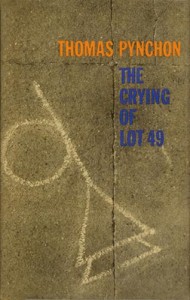 I read my first Thomas Pynchon novel after a day of hiking around Berkeley in 1967. Walking up Grove Street — events would soon change its name to Martin Luther King, Jr. Blvd — I saw what looked like a muted trumpet spray-painted on the cement support of an overpass, and a bit further a garbage receptacle stenciled with the word “WASTE.” Someone had added periods after each letter so it looked like this: “W.A.S.T.E.” That evening when I crashed on a friend’s floor I pulled a slim book off nearby shelves titled The Crying of Lot 49 by someone named “Thomas Pynchon.” Very soon I discovered the novel’s plot revolved around the very same graffiti I had seen that day outside. Here they were again inside a novel: the once-knotted posthorn with a mute in its bell, and the acronym “W.A.S.T.E.” I fell into sleep that night wondering how much of the story inside the novel — like the graffiti — was also outside the novel, in my world.

My own stint as a private eye took place at the peak of the mania to find Thomas Pynchon. His first two novels won major awards, but he himself remained stubbornly absent from public gaze or interview. When Pynchon published Gravity’s Rainbow in 1973, a bombshell of a novel that may have been the most unread bestseller ever, it was postmodernism’s answer to James Joyce’s Ulysses, and drew nominations for the National Book Award and the Pulitzer Prize. His novels V. and The Crying of Lot 49 had produced a cult following of devoted readers and the literati, but now he was national news. Emissaries from Time Magazine and LIFE went to California but came back empty-handed. In his place, Pynchon sent a comic, Professor Irwin Corey, to receive the National Book Award at the New York ceremony. There are dozens of essays, articles, and websites about the search for Pynchon, but after fifty years, all we have of him are a few pictures. At Pynchon Conferences, movies about him have been shown in which he never appears, the footage mostly clips of places Pynchon may have been. One movie ends with film of an older bearded man looking angrily at the camera. Is that Pynchon?
END_OF_DOCUMENT_TOKEN_TO_BE_REPLACED 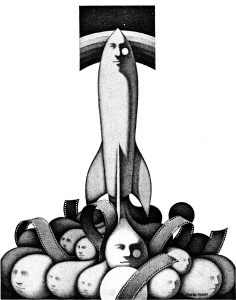 This review, by American literary critic Richard Poirier (1925 – 2009), which first appeared in The Saturday Review (1924 – 1986) on March 3, 1973, is one of the first reviews of Thomas Pynchon’s third novel. It is detailed and insightful and is, in fact, a great read before tackling Gravity’s Rainbow for the first time. What I find truly amazing is Poirier’s depth of understanding of Pynchon’s 760-page novel which he’d probably had for maybe a month or so, as it was published on February 28, 1973.

From The New York Times Obituary: “Mr. Poirier (pronounced to rhyme with “warrior”) was an old-fashioned man of letters — a writer, an editor, a publisher, a teacher — with a wide range of knowledge and interests. He was a busy reviewer for publications from The New York Review of Books to The London Review of Books, and his reviews could sting.”

The fantastically variegated and multi­-structured V., which made Thomas Pynchon famous in 1963 and the wonder ever since of anyone who has tried to meet or photograph or interview him, is the most masterful first novel in the history of literature, the only one of its decade with the proportions and stylistic resources of a classic. Three years later came The Crying of Lot 49, more accessible only because very much shorter than the first, and like some particularly dazzling section left over from it. And now Gravity’s Rainbow. More ambitious than V., more topical (in that its central mystery is not a cryptogram but a supersonic rocket), and more nuanced, Gravity’s Rainbow is even less easy to assimilate into those interpretive schematizations of “apocalypse” and “entropy” by which Pynchon’s work has, up to now, been rigidified by his admirers.

At thirty-six, Pynchon has established himself as a novelist of major historical importance. More than any other living writer, including Norman Mailer, he has caught the inward movements of our time in outward manifestations of art and technology so that in being historical he must also be marvelously exorbitant. It is probable that he would not like being called “historical.” In Gravity’s Rainbow, even more than in his previous work, history — as Norman 0. Brown proposed in Life Against Death — seen as a form of neurosis, a record of the progressive attempt to impose the human will upon the movements of time. Even the very recording of history is such an effort. History-making man is Faustian man. But while this book offers such Faustian types as a rocket genius named Captain Blicero and a Pavlovian behaviorist named Edward Pointsman, it is evident that they are slaves to the systems they think they master.

END_OF_DOCUMENT_TOKEN_TO_BE_REPLACED

For both the original hardcover and paperback versions of Gravity’s Rainbow, the differences between the true first editions and the Book Club editions are fairly subtle, but easy to spot.

When the Viking Press published Thomas Pynchon’s Gravity’s Rainbow in 1973, it simultaneously issued 4,000 hardbacks and 16,000 paperbacks. The reason for publishing the less-expensive paperback ($4.95) at the same time as the hardback ($15.00) was due to the concern of Corlies “Cork” Smith, Pynchon’s editor at the time, that Pynchon’s readership — younger, college-educated, hipper — might balk at coughing up $15 for the novel.

From the Bookforum website: “Pynchon from A to V: Gerald Howard on Gravity’s Rainbow

Now the real problem presented itself: How to publish a seven-hundred-plus-page book at a price that would not be grossly prohibitive for Pynchon’s natural college and post-collegiate audience. V. and The Crying of Lot 49 had each sold more than three million copies in their Bantam mass-market editions. […] According to a letter from Cork Smith [Pynchon’s editor] to Bruce Allen (who reviewed Gravity’s Rainbow for Library Journal but wrote to Viking complaining about the novel’s price), Viking would have had to sell thirty thousand copies at the then unheard of price of $10 just to break even. By comparison, V. and The Crying of Lot 49 had sold about ten thousand copies apiece in hardcover. So how to reach even a fraction of the cash-strapped Pynchon-loving millions? Cork himself hit on the then unique strategy of publishing an original trade-paperback edition at $4.95 and “an admittedly highly priced hardcover edition” at $15, each identical in paper stock and format, differing only in their binding. The gamble: “We also thought that Pynchon’s college audience might, just might, be willing to part with a five-dollar bill for this novel; after all, that audience spends that amount over and over and over again for long-playing records.” The other gamble was with the reviewers, who rarely took paperback fiction seriously, but as Cork wrote, “We feel — as, clearly, you do — that Pynchon cannot be ignored.”

As you may know, both editions in their first printings are quite valuable, particularly the hardcover (and even superior copies of subsequent printings of the first edition), but also the first edition/first printing of the paperback edition. However, the differences between true first editions and the subsequent Book of the Month Club (“BoMC”) (hardcover) and Quality Paperback Book Club (“QPBC”) editions of Gravity’s Rainbow, both published in 1973 (Thomas Pynchon: A Bibliography of Primary and Secondary Sources, Clifford Mead, p.13), are a bit subtle, but easy to identify when you know what to look for.

NOTE ABOUT VALUE: First editions of both the hardcover and paperback editions of Gravity’s Rainbow are only of significant value if they’re first printings, although later printings of both are still pricier than later editions. Printings subsequent to the first printings are clearly indicated on the copyright page, after the line “Printed in U.S.A. by the Colonial Press Inc.” If there is no indication of a subsequent printing, then it’s a first printing (assuming, of course, it meets the other criteria in this article).

Both the hardcover and paperback editions went into multiple printings after the first run. BoMC hardcover editions generally go for between $100 – $300, depending on their their condition (VG to Fine). The QPBC paperbacks are not worth that much at all and should only fetch more than, say $10, only if they are misrepresented as first editions.

END_OF_DOCUMENT_TOKEN_TO_BE_REPLACED

On March 1, 1973, the Library Journal published a review of Thomas Pynchon’s Gravity’s Rainbow, with the reviewer Bruce Allen declaring Pynchon’s third novel to be “the most important work of fiction yet produced by any living writer.” But Allen also wrote to Viking, the novel’s publisher, complaining about the $15 cost of the hardback edition.

Pynchon appreciated Allen’s review but, more importantly, he understood Allen’s complaint about the price and, in a letter — dated March 25, 1973 — attempted to shed some light on Viking’s reasons as well as his own feelings on the matter. The letter (on the usual quadrille paper):
END_OF_DOCUMENT_TOKEN_TO_BE_REPLACED